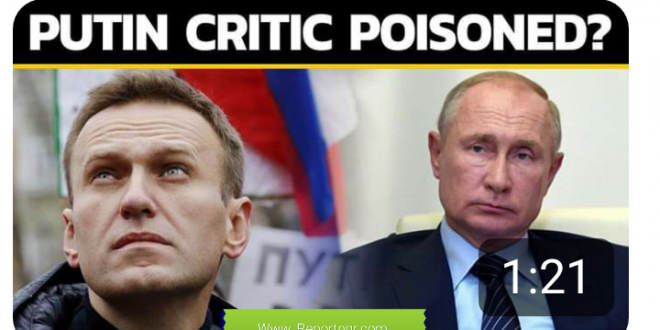 The fierce Kremlin critic is said to be on a ventilator in intensive care after falling ill while on a flight. This led to an emergency landing.

Fierce Kremlin critic and opposition leader Alexei Navalny is in a coma as doctors fight for his life after he was poisoned Thursday morning, his spokesperson said.

The 44-year-old enemy of Russian President Vladimir Putin felt unwell on a flight back to Moscow from Tomsk, a city in Siberia, Kira Yarmysh said on Twitter.

“The plane made an emergency landing in Omsk. Alexei has a toxic poisoning,” she tweeted.

Navalny is said to be unconscious and was placed on a ventilator in an intensive care unit.

However, Yarmysh did not say who she believed may have poisoned Navalny, but said police had been called to the hospital.

The politician is in a grave but stable condition, Anatoly Kalinichenko, deputy chief physician at the Omsk Emergency Hospital No. 1., said in a video shared by Yarmysh on Twitter.

Kalinichenko said all possible reasons for Navalny’s sudden illness were being looked at, including poisoning.

“Doctors are really dealing with saving his life right now,” he added at a later briefing with reporters.

Yarmysh said that doctors were preventing Navalny’s wife, Yulia, from seeing her husband.

She quoted the doctors as saying the wife’s passport was insufficient evidence of her identity, instead asking for their marriage certificate which she wasn’t carrying.

Yarmysh told the Russian radio station Echo of Moscow there are tests being conducted to determine the nature of the toxin used.

She said Navalny only had a black tea at an airport coffee shop before getting on the plane in the morning. And they believe that’s how he could have been poisoned.

However, she said she was sure it was “an intentional poisoning.”

“A year ago, he was poisoned in a prison, and I am sure the same thing happened here,” she told the station. “It’s different symptoms, obviously a different toxin, but obviously this was done to him intentionally.”

Jaka Bizilj, the founder of Cinema for Peace, a German organization which promotes humanitarian and environmental issues through film, said Thursday afternoon that it had “arranged to send an air ambulance with medical equipment and specialists” to pick up Navalny and take him to Berlin for treatment.

“We are in contact with the authorities and hope that all permits for the transport and a medical report for the coma patient will be given tonight,” he told NBC News on the telephone.

It was unclear whether Navalny was well enough to travel, or whether Russian authorities would grant the organization permission to transport him.

But earlier Kremlin spokesman Dmitry Peskov said an investigation would be launched if it turned out Navalny was indeed poisoned.

Asked if this was a special case because of Navalny’s outspoken criticism of the Russian government, he added, “the current government has many critics,” according to the state-run TASS news agency.

Meanwhile, elements of Russia’s tightly-controlled state media have been exploring the narrative that Navalny may have had a lot to drink the previous night and took some kind of hangover pill today.

An anonymous law enforcement source told TASS that authorities are not yet considering this a poisoning.

“For the moment, this version is not being considered,” the official said. “It is possible that he drank or took something himself yesterday.”

Last year, Navalny was rushed to a hospital from prison where he was serving a sentence following an administrative arrest, with what his team said was suspected poisoning.

Doctors then said he had a severe allergic attack and discharged him back to prison the following day.

In 2017, he was attacked by several men who threw antiseptic in his face, damaging one eye.

Pavel Lebedev was on the same plane as Navalny. He posted an image of the politician drinking something out of a cup before the flight on his Instagram Stories.

NBC News could not confirm that the photo shows the beverage that his spokeswoman believes may have poisoned him.

In a series of videos uploaded to his Instagram, Lebedev said he saw Navalny go to the bathroom after takeoff, and he did not return for a while.

“I heard a commotion and took my headphones off,” he added. “It turned out that there was an emergency landing in Omsk. So I thought someone was feeling ill. Then I turned my head and I saw Alexei lying down.”

Navalny rose to prominence in 2009 with investigations into official corruption and became a protest leader when hundreds of thousands took to the streets across Russia in 2011 to protest electoral fraud.

A few years later, and after several ushort-term spells in jail, Navalny faced two separate sets of fraud charges, which were viewed as political retribution aimed at stopping him from running for office.

In his only official campaign before his first conviction took effect, Navalny garnered 30 percent of the vote in the race for Moscow mayor in 2013.

Navalny also campaigned to challenge Putin in the 2018 presidential election, but was barred from running.

Navalny’s anti-corruption foundation has conducted in-depth investigations into the highest ranks of the Russian political elite, including his most famous investigation into former prime minister and president Dmitry Medvedev.

Last month, he had to shut down the foundation after a financially devastating lawsuit from Yevgeny Prigozhin, a businessman with close ties to the Kremlin.

Russia holds regional elections next month and Navalny and his allies have been preparing for them, trying to increase support for candidates whom they back.