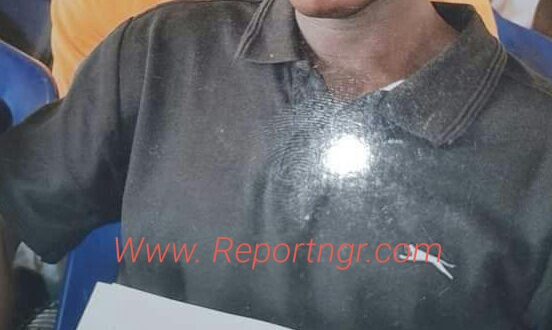 It was in August 2003. A 17 years old boy was arrested on his way from school by sars officials and put in prison for an offence he knew nothing about.

Adebayo Ojo is his name. Right now, Adebayo Ojo faces rejection from the society. Although he had Second Class Upper Degree While in Prison.

Read more: Lady left fiance after finding out he is a dustbin packer

See this occurrance that suggests that the world coming to an end.

How the number one African market engulfed in flames

Adebayo ojo was barely 18, from Ogotun, Ekiti state. He was first child of a polygamous home.

On that fateful day, he was on his way back from school when he was arrested by men and officers of the notorious state anti-robbery squad otherwise known as SARS.

Prior to his arrest, there was a report of armed robbery in the home of a prominent indigene of the community.

Police were invited to help investigate and apprehend those involved in the said alleged robbery.

But trust the Nigerian Police. Rather than conducting a thorough investigation into the alleged robbery.

Elements from SARS Head office, Ekiti State swooped on the sleepy town, arresting, extorting, harassing and intimidating any young man at sight. It was a massive raid.

Poor Adebayo Ojo was arrested on the street within the community alongside other persons. And was taken to SARS Headquarters.

It was like a dream to him. The false accusations, the written statements obtained after dehumanizing torture and inexplicable duress.

The charade was supposed to frighten the victims into parting with huge sum of money for bail.

Unfortunately, these are folks from rural areas where a family of five feeds on less than a dollar in a day.

So, while those who could had the financial wherewithal “bailed” themselves out of the SARS officials gulag after paying large sums of money. Adebayo Ojo’s parents who are poor subsistence farmers could not meet up with the exorbitant sum of money demanded as bail.

Angered by what they considered to be outright disobedience to their sinister demands, SARS officials subjected young Adebayo Ojo to excruciating torture. And had his genitals crushed with pliers in order to extract “confessional statement”from him.

Under severe pains and a delirious Adebayo Ojo confessed to a robbery he knew nothing about.

However, the complainants in the matter were invited and informed that the young Adebayo Ojo had confessed to the robbery.

Oddly enough , the complainants were determined to draw blood at all cost despite their misgivings and the doubt in their hearts that those who robbed their premises weren’t as young as the innocent victim being paraded before them.

So young Adebayo Ojo was subsequently arraigned in the high court of Ekiti state on a two count charge of robbery and conspiracy.

On the basis of his confessional statement, he was convicted. And not surprisingly, sentenced to death by the High court of Ekiti State.

Of course his fate was already sealed partly because he had no means of hiring competent lawyers to defend him. Moreso, because even the Office of the Public Defender nominated by the court to defend him were generally lackluster and not diligent in the handling of the matter.

That was the beginning of a traumatic 17 years journey from one Nigeria prison facility to the other as a condemned criminal awaiting execution.

Nevertheless, years later, about 6 years as an awaiting execution convict or thereabout, the actual robbers were subsequently discovered and apprehended.

Ironically, young Adebayo Ojo remained in prison having being condemned to death for 17 years for an offense he did not commit.

While in prison, he reached out to General Counsel of the JOINT LEGAL ACTION AIDS (JLAA) through Barrister Kingsley Ughe.

JLAA mounted spirited efforts for his release. His death sentence was subsequently commuted to life imprisonment.

JLAA advised him and got him and many others to continue his education, hitherto aborted due to his ordeal through the prison correctional education program.

He subsequently made his O level as an inmate on death-roll, got admission into the NATIONAL OPEN UNIVERSITY OF NIGERIA (NOUN) where he read Criminology and Security studies.

Adebayo Ojo, through sheer will and determination graduated in 2019 with a second class upper level honors.

JLAA brought the ordeal of this young man to the then governor of Ekiti State, Dr Kayode Fayemi who in exercise of his powers of prerogative of mercy granted Mr. Adebayo Ojo amnesty and released him in October 2019. Exactly 17 years after his conviction and sentence to death for an offense he knew nothing about.

Out of prison and armed with a second class upper university degree result, young Adebayo Ojo, now 34 years of age is faced with new round of discrimination, stigmatization and disillusionment.

The Ekiti State Governor who promised to give him an employment in the State Civil Service did not fulfill his initial promise.

His numerous applications to the Ekiti Civil Service and corporate organisations were rejected on the ground that he is an ex-convict.

And therefore not eligible to work in the civil service or any corporate organisation at that.

Ordinarily, the idea of prison reforms presupposes opportunities of a second chance to persons such as Adebayo Ojo, who have served their terms and gone through correctional system.

When the gate of the prison opens, the path ahead for such person should lead to a better life and reconciliation with a welcoming society.

But this is not the case for young Adebayo Ojo. He is rejected everywhere, denied opportunity of a second chance and a new beginning in life owing to stigmatization from society.

Homeless, penniless and yet again frustrated and without any means of livelihood even with a second class upper degree in his kitty. Adebayo ojo is once again faced with the trauma and specter of rejection by a society that took his youth away from him.

He sauntered into Greystone Solicitors/ JLAA Head Office today. He was pale, gaunt, lean and hungry looking. He demanded to see me and questioned why JLAA had to release him from prison to face a more traumatic solitary confinement.

However, he narrated to the team of lawyers present at the office how he feels like an outcast. He tells of his rejection. The trauma he faces and the difficulty in starting life again.

Meanwhile, the rejection of those who have gone through our correctional facilities and the unwillingness of society to accept them back into our fold is a problem to solving the menace of crime.

It does nothing for the victims of crime or the society. It is a cruel and useless system.

Although the only conclusion one can reach when faced with this kind of pathetic case is that the crime of our insensitive leaders and our skewed criminal justice system on the poor and defenseless in our midst must not go unpunished and unaddressed.

Today young Adebayo Ojo needs a job desperately not only as a means of survival but to reassure our dying humanity that there is still some milk of human presence outside the prison wall amongst us.

For the question will always be asked;
Who sent Adebayo Ojo to the fringes of human existence? Is it the SARS officials? The Criminal Justice System or the insensitive and pitiless Nigerian society?

Moreover, many Nigerians have been raising their voices daily against the atrocities of SARS officials.

Their misconduct and victimization of youths have done more harm than good on the society.

Previous IS THE WORLD COMING TO AN END. SEE WHAT APPEARED IN LONDON SKY
Next RUSSIAN PRESIDENT’S NUMBER ONE ENEMY POISONED