Breaking News
Home / Featured / IS THE WORLD COMING TO AN END. SEE WHAT APPEARED IN LONDON SKY 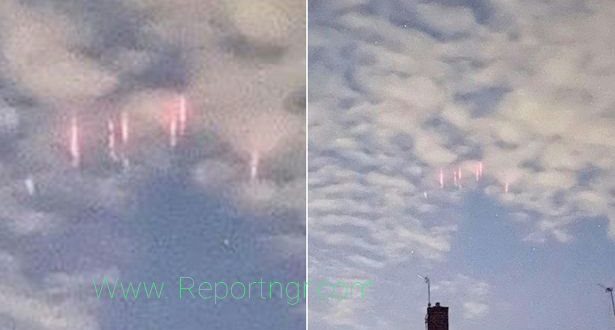 There was another mystery occurrance on Monday night. Bright white lights that turned red appeared in the sky above United kingdom.

White glowing beams of light was seen in the sky for a while before it changed to red.

How indians originated from west africa

A widow whose house burnt gets help from Enobong Hammer Uwah

Gradually, the lights faded above the city of Leicester.

Meteor experts said that the lights are likely to be sprites.

“Resident who spotted strange colour-changing lights in the sky above Leicester may have been seeing sprites, meteor” experts claim.

However, the photos of the lights seen in the sky at about 11.30pm on Monday were shared online in a bid to find answers.

Morever, the person that took the images told Leicestershire Live:

But a spokeswoman from the UK Meteor Observation Network provided an insight into what they might have been.

“After about 30 seconds of me noticing them and taking a picture they turned a red colour. They were there probably for about five minutes, they didn’t move but then faded.

“They were a bright white,” when the witness first noticed them.

“I often look out and get pictures of the stars but that was the first time I’ve seen anything like that.

“I was just intrigued to know what they were really.”

“These look like sprites to me: transient luminous events which are quite rare.”

Skybrary  – a website dedicated to aviation safety knowledge – said this:

“They occur above large storm systems and reach 50–90km in altitude. And are triggered by positive discharges of lightning between the top of a thundercloud and the ground (commonly called positive giants).”

Notwithstanding, the name sprite is an acronym for Stratospheric/mesospheric Perturbations Resulting from Intense Thunderstorm Electrification.

Normally, they are reddish-orange or greenish-blue in colour with hanging tendrils (sometimes referred to as “carrot sprites”) and arcing branches above.

But unlike tropospheric lightning, sprites are cold plasma, similar to fluorescent tube rays.

Nevertheless, many people who read the post in the social media stated that the end of the world is near.