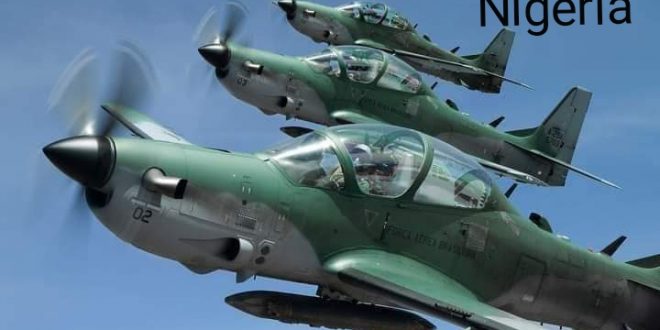 The United States of America has sent the remaining 6 Super Tucano fighter Jets to Nigeria making a total of 12.

This is the Second Bach Of A-29 Super Tucano Fighter Jets Aircrafts that departed from US to Nigeria.

On the 31st August 2021, the Minister for Defense in the presence of US officials inducted US Super Tucano fighter jets, as a decisive step towards combatting growing insecurity and insurgency in Nigeria.

The total cost of the purchase, including maintenance contract, is valued at almost $500 million- making it the largest Foreign Military Sales (FMS) program in sub-Saharan Africa.

Report Nigeria gathered that the second batch of the A-29 Super Tucano fighter jets acquired by the federal government to boost the war against insurgency and banditry has already departed the United States to Nigeria.

According to Thisday a group of pilots flying the six A-29 aircraft from Georgia to Nigeria stopped over in the city of Worcester to refuel Wednesday night before taking off again on Thursday.

The United States Government had earlier promised that the six remaining A-29 Super Tucano fighter jets would arrive in Nigeria this month (September).

The six planes are designed for intelligence, surveillance, reconnaissance missions.

The first batch of the attack aircraft had earlier been delivered by the US and have since been inducted into the Nigerian Air Force (NAF) order of battle by President Muhammadu Buhari and United States government officials at the Nnamdi Azikiwe International Airport, Abuja.

Report Nigeria gathered that the military planes are unable to fly across the Atlantic Ocean and have made it’s way for a North Atlantic route, hopping to multiple spots to refuel with Worcester being one of the places to stop over and refuel.

Nevertheless, the initial six Tucano delivered by the US flew through five countries, including Canada, Greenland, Iceland, Spain, and Algeria before arriving at their final destination in Nigeria towards the end of July.

The planes refueled at Rectrix in the Worcester Regional Airport in the United States.

The A-29 Super Tucano were designed by the Sierra Nevada Corporation in Sparks, Nevada. They are light attack aircraft to be deployed by the NAF in the fight against terrorism in the country.

Worcester Telegram reported that the US Ambassador to Nigeria, Mary Beth Leonard, a Worcester native, was in town for her high school reunion at Doherty Memorial High School.

On January 16 2016, Afghanistan Air Force receive the first batch of A29 super tucano light Attack fighter jets for counter insurgency operations. 4 out of 20 of these Jets were received and the rest were donated by Brazil tucano company up to the end of 2016.

Earlier, some NAF Pilots had completed the Course to Fly the A-29 Super Tucano.

Nigerian pilots who were on training to fly the A-29 Super Tucano fighter jets at US Air Force base all graduated successfully and returned back to Nigeria to join their colleagues in the fight against banditry and terrorism.

Read Also: These Two Natural Items Will Save Your Life, Relationship, Marriage And Stop Evil Attack