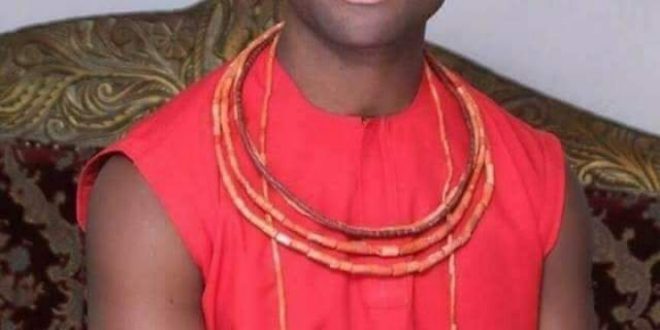 An immediate past Odionwere Omada, Roland Ekhoe has been banned from entering the Oba of Benin Palace.

The tittle, Odionwere Omada is the past head of the male servants who are always with the King in the palace.

They bear the traditional staffs and move along with the king. Odionwere Omada is never a prince of the kingdom. And that is the reason why after a specific number of time, they graduate and leave the palace while another one is appointed.

Nevertheless, Roland Ekhoe was banned due to his nefarious involvements in series of land grabbing and extortions.

However, some people close to him stated that he does higher nefarious activities than land grabbing.

A statement carrying the information read this:

Roland Ekhoe, the immediate past Odionwere Omada has been banned from entering the Oba of Benin Palace, due to his nefarious involvements in series of land grabbing and extortions!!!

Everyday for thief , One Special Day for the Owners .

Many things will be revealed now .

These Two Natural Items Will Save Your Life, Relationship, Marriage And Stop Evil Attack

The palace of the Oba of Benin has stood for over 900 years with 40 Obas who have ascended the throne. Till today, most of its traditional rites are still being respected and kept by the Benin Kingdom.

Many things are not allowed in the Oba of Benin palace and some of the forbidden things include:

👉No one is allowed to use umbrella in court: no matter what the weather is like, no one is authorized to use an umbrella in the presence of the Oba of Benin even during festive periods.

👉 Palm fruit is forbidden in The Palace: palm fruits which are popularly known as Banga is banned in the palace or from being brought close to the palace in any way. It is believed that if the Oba of Benin sees palm fruit, blood will flow in the land.

👉Dogs are not allowed in the palace: dogs are forbidden in the palace, and any dog that comes to the palace will die naturally or be killed.

👉Whistleblowing is banned in the palace: using of whistle is prohibited in the palace because it is believed to be a medium of communication between the dead and the living. Therefore, someone blowing a whistle in court might alert a spirit that is unforgiving.