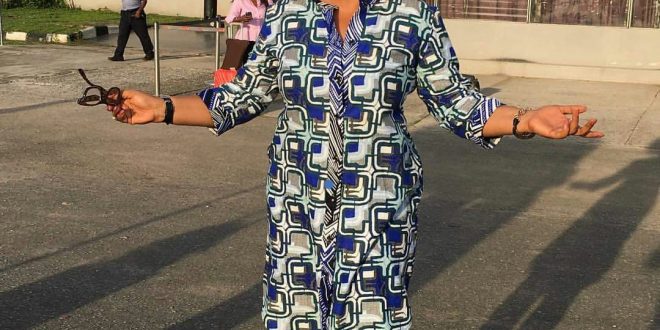 Willie Amadi is one of President Mohammadu Buhari’s appointee. He is the High Commissioner For The Imo State Office Of The Republic Complaint Commission.

The 20 years old school leaver, Peter Nwoke who leaked the video was arrested and imprisoned.

But the convict claimed that he superimposed Amadi’s picture on a background with a sex scene.

Nevertheless, reacting to the judgement through a Facebook post she shared, Hilda Dokubo stated that such technology does not exist in Africa.

Hilda noted that she has been in the industry since 1992 and has moved from being an actress to being a director.

She wondered how much might have been given to Peter Nwoke as ”compensation” for him to” jeopardize his future.”

Hilda Dokubo further wondered why the court judgement was hurriedly given on the case when there are other important cases taking so much time.

She also asked Chief Willie Amadi to take his fall and resign from his position instead of playing with the intelligence of Nigerians.

“What type of compensation and or what level of threat made a 20 years old youth to jeopardize his future bagging a twelve months prison sentence by confessing to an obvious lie?

“Claiming to have done a presently impossible act of video editing and special effects(sfx)”!

“The technology to perform this level of seamless super imposing of still picture on motion picture does not exist”!

“And the knowledge and manpower required to do it? Will need more than the black panther team”.


“Watch the video, note who took the shots, see the position of the principal player, his hands, sitting positions and movement. Watch the reaction of the background players on noticing that they were on camera.


“The devil is in the details in the mirror.
I pray that soon someone will help the young man regain his freedom and return to his family”.


“Well, I hope that the same speed used on this case will be used in restoring peace in Orlu and protecting the citizens.
Nigeria we hail thee”

Previous See The Highest Grossing Nollywood Movie Omoghetto, The Owner Will Shock You
Next “How DNA Confirms That My 3 Children Are Not Mine”- Hon. Justice Okorodas In Tears