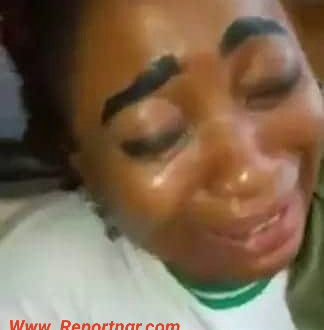 NYSC PARADE: REACTIONS AS LADY CRIED DURING PASSING OUT

A Nigerian lady identified as Bose has surprised people during her NYSC passing out parade as she was seen crying uncontrollably.

Bose was said to have started crying a night to her NYSC parade (passing out) day.

When asked why she had been crying, Bose disclosed to her friends that she does not want to stop getting the 33,000 Naira monthly allowance paid to nysc members.

Bose happened to be a 2019 Batch B Stream 2 corps member.

The information disclosed by NYSC Information via their facebook page read thus:

A lady who happens to be a Corps member (2019 Batch B Stream 2) was seen crying as she was Passing Out.

While some are laughing, others are consoling her.

Below are some of their reactions in comments.

Previous WHERE IS THE SUSPECTED KILLER OF FEMALE COMBAT PILOT, HER DEATH IS SUSPICIOUS, INVESTIGATE-GANI ADAMS
Next MR. EAZI AND TEMI SET TO TIE THE KNOT.

"What type of compensation and or what level of threat made a 20 years old youth to jeopardize his future bagging a twelve months prison sentence by confessing to an obvious lie? "Claiming to have done a presently impossible act of video editing and special effects(sfx)"!