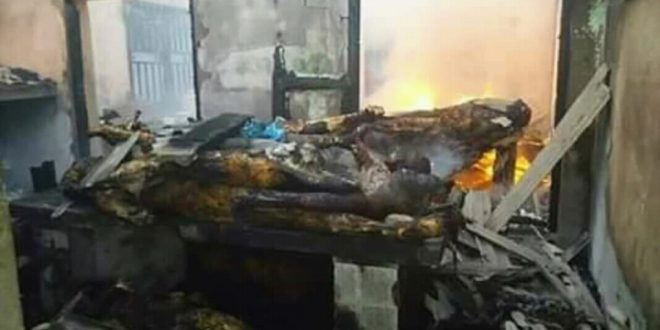 GHOST BURNT CORPSES AT THE MORTUARY

Ghost- The Mortuary Section, General Hospital Enugwu-ukwu in Njikoka local Government Area of Anambra state has been razed by fire. The fire started around 5.41pm on Saturday, 29th December 2018. Meanwhile, over fifty corpses burnt beyond recognition. Moreover, the fire caused extensive damage on the building.

However, Police Patrol Team led by DPO Nimo Division, CSP Benjamin Egu was at the scene to ensure security. The police team protected the area and made sure that criminals did not take advantage of the situation. CSP Egu’s team also ensure that Fire Service Department arrived and put off the fire. SP Haruna Mohammed, PPRO Anambra State Command confirmed this.

UNKNOWN CAUSE OF FIRE

Nevertheless, the cause of the fire is yet unknown. But the case is under investigation to get to the root of the incident.

Moreover, according to a gardener (who doesn’t want his name in print), the fire was caused by a ghost. Below is the statement of the gardener: “This is not the first, second, fifth or tenth time strange things happen in this mortuary. Most of these corpses you see here did not die in peace. Most of them were killed by wicked people. The spirit of such corpses are never happy. They always disturb us here”

“In June this year, a woman was brought here, but each day she was seen cooking in the mortuary. You will see someone cooking from the door and an empty bed. But when you come closer, you will only see her lying on the bed. And the cooking items would be seen beside the bed. This continued for days. The relatives were asked to remove her. It was then they said that the woman died in an accident on her way to buy foodstuffs from market.”

” There was another corpse here last year. Each night he must bring all the other corpses down from their beds. Every morning he used to be the only one on the bed . While all the corpses around him would be on the ground. We forced his relatives to take him out. It really disturbed here. Another one was seen flogging other corpses.”

“Was it not in Easter this year that one corpse gave us headache here. He used to shout to the hearing of passers-by. No body could stay here from 6pm. When the relatives came to take him for burial he was no where to be found. They went home and performed whatever. When they came the next day, he was lying peacefully in his bed for the first time. Abd they took him”.

“Two days ago, around 12 to 3 midnight, inside this mortuary, strange voice was shouting “Fire burn them, Fire burn them”. It shouted for hours. Everybody here heard it. And today, this happened. My dear, all I have experienced here cannot be said in one day. They are many. I hear people say that there is no ghost. My brother, ghost is real. And there is life after death.” He concluded.

Meanwhile, no decision has been taken on the burnt corpses. And none of the relatives have made a comment as at the time of this report.