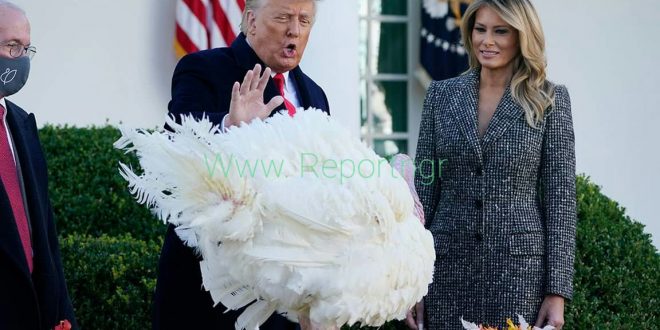 The U.S. President Donald Trump has pardoned this years Thanksgiving turkey. The turkey is named Corn.

The president stands with first lady Melania Trump as he pardons the National Thanksgiving Turkey “Corn”.

This took place during the 73rd annual presentation in the Rose Garden at the White House in Washington, D.C., November 24th 2020.

In one American’s unusual traditions, a Thanksgiving turkey is spared from becoming a family dinner by being pardoned by the U.S. president.

Ivanka further stated that Corn and cob will retire to Iowa State University.

With their Thanksgiving turkey duties complete, Corn (and Cob) will retire to Iowa State University! 🌽🦃”

Just last week, a young man was murdered iho village in around Imeko Afon, some days ago the same rebellious group of herders attacked owode-ketu community in Yewa north where several lives were sent to the mother earth while many sustained various degrees of injuries. In the same vein over the night, this same evil doers attacked