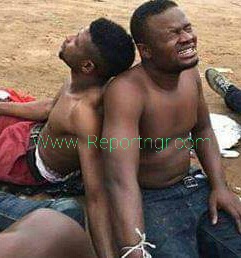 However, the yet be named suspects were nabbed by local vigilantes in Agidiehe quarters of the community at about 9.30 pm on Wednesday night.

They were conveying the coffin from their house to their ritual activity site.

Police spokesman Onome Onowakpoyeya who confirmed the arrest said the boys were in possession of the coffin for alleged ritual purposes.

It was gathered that female pants and brassieres were among the items in the coffin when the suspects were forced to open it.

Furthermore, it was gathered that the local vigilance group intercepted the alleged fraudsters before inviting policemen.

Meanwhile, the police spokesperson said the command has stepped up investigation into the matter.

According to the source, “The crowd would have mobbed the boys if not for the timely intervention of the police.