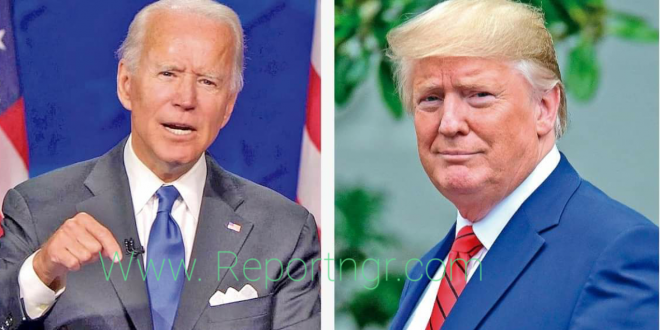 Twitter has stated that it will hand over the control of United States of America president’s official account to Joe Biden.

According to Twitter, the official Twitter account currently in use by President Donald Trump will be handed over to Joe Biden by January 20th 2021 regardless of whether Donald Trump has left the White House or not.

NIGERIA IS A DICTACTORSHIP, SANWO OLU SAY THE TRUTH ABOUT LEKKI SHOOTING-DJ SWITCH

Meanwhile, President Donald Trump of United States of America is yet to accept defeat.

And has not vacated the White House for President-elect Joe Biden. “But the Potus Twitter account will be handed over to Biden anyway”, according to Twitter.

However, Donald Trump has tweeted 10,900 times since taking over the POTUS account in January 2017.

Nevertheless, all his posts will be archived and an account tallying zero Tweets will be passed to Biden on January 20th 2021.

Twitter said there would be no need to share information between the outgoing and incoming presidency teams.

Moreover, it is likely to have little difference to Trump, who boosts more than double the number of followers on his personal account @realDonaldTrump

Other accounts to be moved on to the next administration include @WhiteHouse, @VP and @FLOTUS.

When President Barack Obama left the White House in 2017, the administration’s Twitter accounts were archived and left to the management of the National Archives and Records Administration.

Obama’s tweets are now held under the handle @POTUS44.

A @POTUS45 account has already been set up, presumably as a placeholder for Trump’s official tweets as president.

Yesterday, Trump returned to the White House briefing room for the first time since the elections. And once again claimed he ‘won’ despite trailing Biden by millions of votes.

Read Also: WITH THE GAUVA LEAVES, YOU CAN LIVE MORE THAN 100 YEARS

But as soon as the presidency is handed over to Biden, Trump will lose the protection under Twitter’s ‘world leaders’ policy. Which allowed tweets that broke the rules to remain up with a warning.