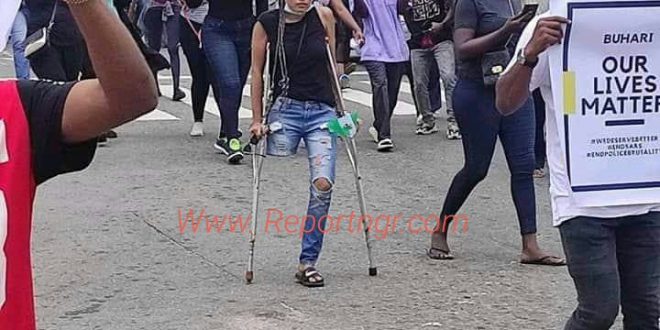 The Amnesty International has disputed Nigerian army’s claim that it did not shoot peaceful Lagos protesters. The Lekki shooting of October 20th 2020 is being evaluated and more facts are emerging.

According to Amnesty International, at least 12 people were killed in the Lekki shooting on October 20 [File: Temilade Adelaja/Reuters]

LEKKI MASSACRE: I DID NOT ORDER THE KILLINGS -SANWO OLU

However, one week after the shooting of peaceful demonstrators in Lagos, Nigerian army has admitted its soldiers were deployed to restore peace and order at Lekki Toll gate.

But the army denied they opened fire on the crowd protesting against police brutality.

At least 12 protesters were killed in the Lekki shooting of October 20, according to Amnesty International.

Earlier, the army had maintained that its troops were not at the site. But late on Tuesday a military spokesman, Major Osoba Olaniyi, said soldiers were sent to enforce a curfew. However, he denied that the troops shot at the protesters.

“At no time did soldiers of the Nigerian army open fire on any civilian,” Olaniyi said in a statement.

Soldiers were deployed on orders from the Lagos state government due to “violence which led to several police stations being burnt, policemen killed, suspects in police custody released and weapons carted away”.

However, the state Governor Babajide Sanwo-Olu said the state has no authority over the national army.

“It is imperative to explain that no governor controls the rules of engagement of the army,”

Sanwo Olu wrote on Twitter a day after the shooting.

“I have nevertheless instructed an investigation into the ordered and the adopted rules of engagement employed by the men of the Nigerian Army deployed to the Lekki Toll Gate.”

Meanwhile, military did not say how the soldiers intervened to curb unrest beyond denying that they shot protesters.

The military’s statement came shortly before Amnesty International’s Wednesday publication of an investigation.

At 6:29pm (17:29 GMT) on October 20, two military vehicles were filmed leaving at Bonny Camp. While later footage shows four others that appear to be used by the military and police, according to the group.

“What happened at Lekki Toll Gate has all the traits of the Nigerian authorities’ pattern of a cover-up whenever their defence and security forces commit unlawful killings,” said Osai Ojigho, Amnesty’s country director for Nigeria.

“The initial denials of the involvement of soldiers in the shooting was followed by the shameful denial of the loss of lives as a result of the military’s attack against the protests.

Many people are still missing since the day of the incident, and credible evidence shows that the military prevented ambulances from reaching the severely injured in the aftermath.”

Evidence From A Lagos-Based Army Officer

A Lagos-based soldier, who declined to be identified because he was not authorised to speak to the media, told Reuters news agency that troops from the army 81st Division’s 65th Battalion, based at Bonny Camp, had fired on unarmed civilians at the toll gate.

Witnesses at Lekki described armed men in army fatigues arriving around 7pm (18:00 GMT) at the site of the peaceful protests, where demonstrators knelt to wave flags and sing the national anthem before the men raised their guns and shot into the crowd.

A judicial panel began investigating the shooting on Tuesday. The panel is also investigating allegations of abuse against the Special Anti-Robbery Squad (SARS), an infamous police unit accused of extortion, extrajudicial killings, rape and torture.

The Youth-led protests against police brutality erupted in early October after a video that allegedly showed a SARS operative killing a man was widely shared online.

But the protests persisted with participants demanding sweeping reforms of the police force and action against corruption.

The shooting at Lekki plaza took place after authorities imposed the round-the-clock curfew ordering everyone to stay at home. For two days after that, Lagos saw widespread rioting.

Overall, Amnesty estimates that 56 people have died across the country since the protest began, including protesters and “thugs who were allegedly hired by the authorities”.