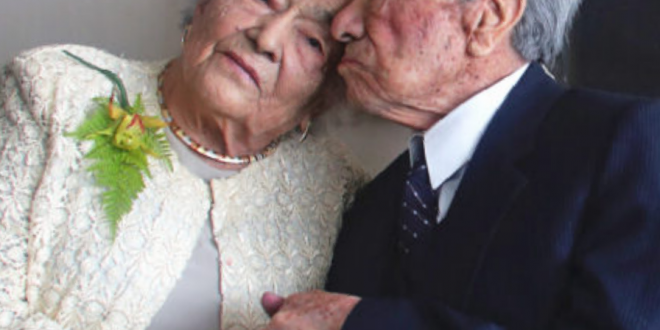 The Guinness Book Of Record has recognized Julio César Mora and Waldramina Quinteros Quintero as the world oldest couple. The couple are from Ecuador.

According to report, Julio César Mora and Waldramina Quinteros Quintero were married in Ecuador on February 7, 1941.

Read also: How Chadwick Boseman died at the age of 43

Guiness recognized the pair as the oldest living married couple with a combined age of 214 years and 358 days.

The couple both worked as teachers and met in 1934 through the husband of Quintero’s sister.

But their families disapproved and were not present during their wedding ceremony.

Read Also: How girl rejected a man’s marriage proposal after he trained her in school

Commendably, Julio and Quintero have been recognized by Guinness World Records as the oldest married couple in the world. With a combined age of 214 years and 358 days.

Mora is 110 years old, and was born before the Titanic sank, while wife Quinteros is 104.

They attributed their longlasting relationship to the love and mutual respect since their very first meeting.

The couple says their secret is family unity under the rules of love, mutual respect, honest work according to Record keeping site. And proper education based on family values are the keys to healthy coexistence.