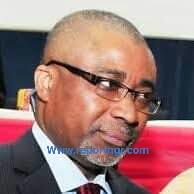 Citizen Segun Sowunmi is a spokesman for the Presidential Campaign Council of the Peoples Democratic Party (PDP) in the 2019 general elections.

On Thursday Sowunmi supported the Senate Minority Leader, Eyinanya Abaribe, over his call for President Muhammadu Buhari to resign.

(Senator Ababribe had while addressing lawmakers during a motion on national security challenges on Wednesday, asked the President to quit over the security situation in the country).

However, Sowunmi explained that Senator Abaribe was speaking on behalf of mudered Nigerians, their families, and others who were victims of the security challenges in the country.

Below is the statement of Sowunmi:

“I think Senator Abaribe’s comments must be situated properly.

“And he is making a very frank call that there is no reason for human lives to be lost under the All Progressives Congress (APC) led administration.”

Above all, Sowunmi asked President Buhari to resign. He stated that his government has failed to address the security challenges of Nigeria since he became president in 2015.

According to him, it has gotten out of the President’s capacity to manage the problem of security.

“There is nothing wrong in honourably resigning and allowing competent hands to take over,” the PDP member stated.

He further said, “That is the reaction from all of those that are friends of this government. They are reacting as it were, spitting on the graves of the dead”.