Breaking News
Home / Featured / Crime / Why Nigeria Should Say No To State Police! 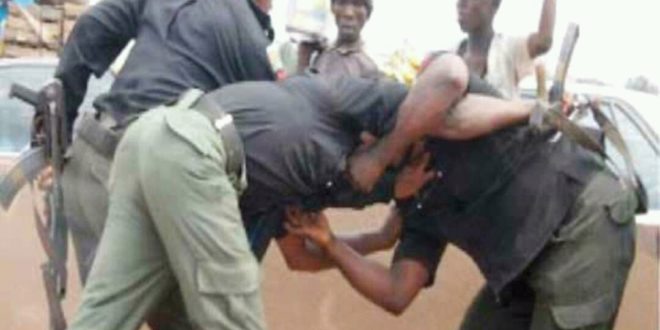 Why Nigeria Should Say No To State Police!

THE SECURITY LAPSES ENCOUNTERED IN NIGERIA HAVE LED TO SERIES OF CALLS FOR THE ESTABLISHMENT OF STATE POLICE. THIS IS  TO COMPLEMENT THE EFFORTS OF THE NIGERIAN POLICE FORCE.

Police Force is an organisation saddled with  the responsibility of ensuring the security of life and property. An institution for  enforcement of law and order.  It is also an institution for  detection and prevention of crime. These are the central functions of Nigeria police with a central command.

The establishment of a state police means:   That Nigeria would have security outfits whose functions  are to be controlled, managed and directed by various state authorities.  Meaning that it would be controlled by component states of Nigeria.

There have been  calls from some  quarters for the creation of a quasi police.  However, this  seems to underscore the fact that there are  underlying intentions by some  politicians to actualize such a proposal.

They should be discouraged from doing this. First, we must note that  state police is a duplication of functions.  therefore it is  superfluous.

If State Police  sees the  light of the day in Nigeria, under the present socio-political structure, the unimaginable will happen in Nigeria.

One may ask why State Police is a negative move. Yes, State Police will only create conflicts, rivalry, acrimony ,chaos, etc.  These will all amount to the Nation burning its candle at both ends.

Abuse of authority and  power tussle between the states and the Federal Government will assume a dangerous dimension.  Most importantly with  the establishment of state police.  While the states will like to prove their authority. The federal will claim to be the apex authority to detect the pace. Thus, the control of the state police apparatus will become a  serious problem.

A situation that will tantamount to anarchy, indiscipline, corruption and disrespect. This  struggle for supremacy and recognition would be to the detriment of the security needs of the nation. This will nevertheless,  render the venture into a colossal failure.

The concomitant problems associated with state police is numerous.  First , one has to consider that non-indegenes of the state are likely to suffer unduly in the hands of their host states.

LASTMA AS A NEGATIVE EXAMPLE

Already, there have been  existing signs of this. Activities of the Lagos State  Traffic Control and Maintainance Agency  (LASTMA) towards non indegenes leave much to be disired.

In many cases , LASTMA have arrested motorists and confiscated their vehicles on trumped up charges. They are more dastardly when the driver is a  non-indegene or unable to  speak Yoruba language.

A case in point is that of one Danfo driver from the South-East of Nigeria. He operates in  Lagos state.    His vehicle was impounded days after a clash between a  soldier who happened to be  his passenger and some LASTMA operatives.

His only sin was that the soldiers  was his passenger. Before he could protest, LASTMA  has auctioned his vehicle. Justice only came to him when court ordered LASTMA to replace the vehicle.

THE BAKASSI BOYS AS ANOTHER EXAMPLE

The Bakassi Boys of eastern  Nigeria is another of such example. Everybody witnessedhow Bakassi boys became lord of the East.  Their jungle justice activities are too numerous to list. If they should operate with full government authority,  how would  the eastern Nigeria be?

If a mere traffic control agency owned by the state can go to  this extent,how much more the big masquerade called the police?

We all are aware of the happenings in northern Nigeria where christains are being forcefully subjected to sharia system of justice.

With the state police ,Justice can never be  done to non indegenes in every state of Nigeria.

Perhaps, the security challenges in the country are prompting few individuals to call for the creation of state police.  These category  of people travel mainly by air or with  police  escorts.  They are  not aware of  the realities on ground nor in touch with the common man. However as a result, they   do not feel the pains of the less privileged Nigerian dwelling outside their states.

The little  freedom non  indegenes enjoy in their host states is as a result of the present police structure and administration.  A State Police can only work in situations where “State of origin  syndrome “is not existing.

For state police to be efficient, devoid of brutality, and well tolerated, the state of  origin must be jettisoned. This must be replaced with the  citizen’s place of birth.

Existence of state police in Nigeria will gradually lead to the creation of state armed forces.  And what next when a state has its police and army?  That is the  birth of Republic in a Republic.