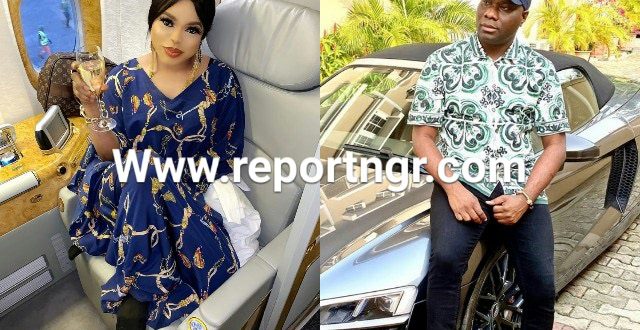 Bobrisky expresses love for Mompha, gushes over him

Controversial Nigerian cross dresser and self acclaimed transgender, Idris Okuneye better known as Bobrisky has taken to his Instagram page to professed love for Mompha.

In a recent post made on social media, Bobrisky shared a picture of Ismaila Mustapha aka Mompha where he inscribed the words “I love him”.

This comes a day after Mompha was rearraigned by the Economic and Financial Crimes Commission, EFCC before a Federal High Court, Lagos, over N32.9bn alleged Internet fraud.

Mompha was first arraigned by the commission on 14 counts bordering on fraud, money laundering and running a foreign exchange business without the authorisation of the Central Bank of Nigeria. He was arraigned alongside his firm, Ismalob Global Investment Ltd.

He had pleaded not guilty to the charges and was granted bail in the sum of N100m with one surety in like sum.

On Wednesday, the amended 22-count charge was read over to the defendant and he pleaded not guilty to all counts.

According to Wikipedia, Bobrisky is a Nigerian internet personality who is known as a transgender woman in Nigeria.

Nigeria is a country with no LGBT rights. She is also known for her presence on the social media.

Bobrisky is a Nigerian and attended  King’s College, Lagos.

Previous Why are you looking at me with pity? – Oshiomole to reporters
Next TOP FOOTBALLERS GIRLS ARE FALLING FOR