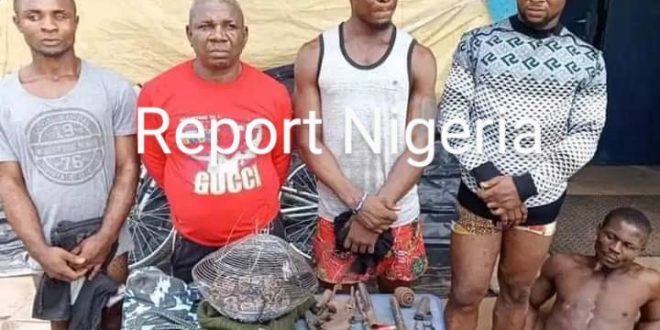 A Nigerian Nollywood Actor King Zealot, was around the 20th May, 2022 paraded by the Nigerian police alongside four others over allegation of being a member of ESN.

As a result of this, netizens, especially fans of Zealot were worried and set to secure freedom for him. Based on this, Report Nigeria Facebook page made a public appeal asking the general public to tell us what the know about what led to the actor’s arrest and public parade.

Individuals who are close to the actor made some shocking revelations and allegations that made Report Nigeria uninterested in the matter.

However, due to the pressure from our numerous fans, we promised to publish our findings which we earlier declined to publish. As we owe our esteemed fans the right to true situations and information.

According to an eye witness, the actor is a native of Agwa in Oguta Local Government Area of Imo State Nigeria. A graduate of Imo State University. A music artist and veteran actor.

Zealot’s father is a strong Native Doctor who prepares potent charms and herbs that cure some illness for his customers. Owing to his business which is moving well, the man became rich that he can live above poverty level.

Unfortunately, after the birth of the actor, King Zealot and his siblings, their mother died. This made their father to remarry after some years to a police inspector from Mbaise Imo State of Nigeria. She became their stepmother.

Nevertheless, it was alleged that this led to the arrest of the actor’s senior brother while the actor and others could not be apprehended by the police.

Owing to this, the senior brother has been allegedly awaiting trial at the Correctional Center [Prisons] Owerri Imo State. While Zealot later found his career in Music and Movie industry. He also participated in the Odogwu Bitters Challenge which brought him to limelight.

It was alleged that during the Owerri Prison break, Zealot elder brother was among the inmates who ran away from the prison and has been on the Nigerian security wanted list.

It was this that led the police to storm their house on that fateful day to arrest him when the information allegedly leaked that he was in his father’s house.

In the process, Zealot, who came in barely two days from Lagos was also arrested. his father was arrested on the ground that he did not inform the police that his wanted sons were at home.

One of his cousins who stays with them was arrested as well as a customer who came for the great herbalist’s service. These are the four people paraded with the Actor.

Meanwhile, aside the public parade by the Nigerian police on the 20th of May 2022, no other information has been made available to the public on the matter.

Zealot has featured in many Nigerian movies including The Blue City.

Report Nigeria urge the public to always remain law abiding and never take the laws into their hands. Police is your friend. Always report issues to the police for proper investigation and resolution.

Above all, never circulate false and fake information.

Previous Fear As Anambra Police Boss Give Communities Ultimatum To Bring Out Unknown Gun Men, Or…